The city of Uji is centrally located around the beautiful Uji River, and is graced with many temples and shrines, which is indicative of Uji city's long history and rich culture.
You can also find here two UNESCO World Heritage sites:Ujigami Shrine and Byodoin Temple registered in December, 1994.
Between the 15th and 16th centuries, this area was the location of many battles as various Shogun's fought for control of Japan.
When you read Japanese classics such as "Nihon-Shoki"(the Chronicles of Japan) and "Manyoshu" (the Anthology of Myriad), you can find the Uji name, which is also the main setting for the "Ten Chapters of Uji" in The Tale of Genji, the oldest and one of the most famous love stories in the world. 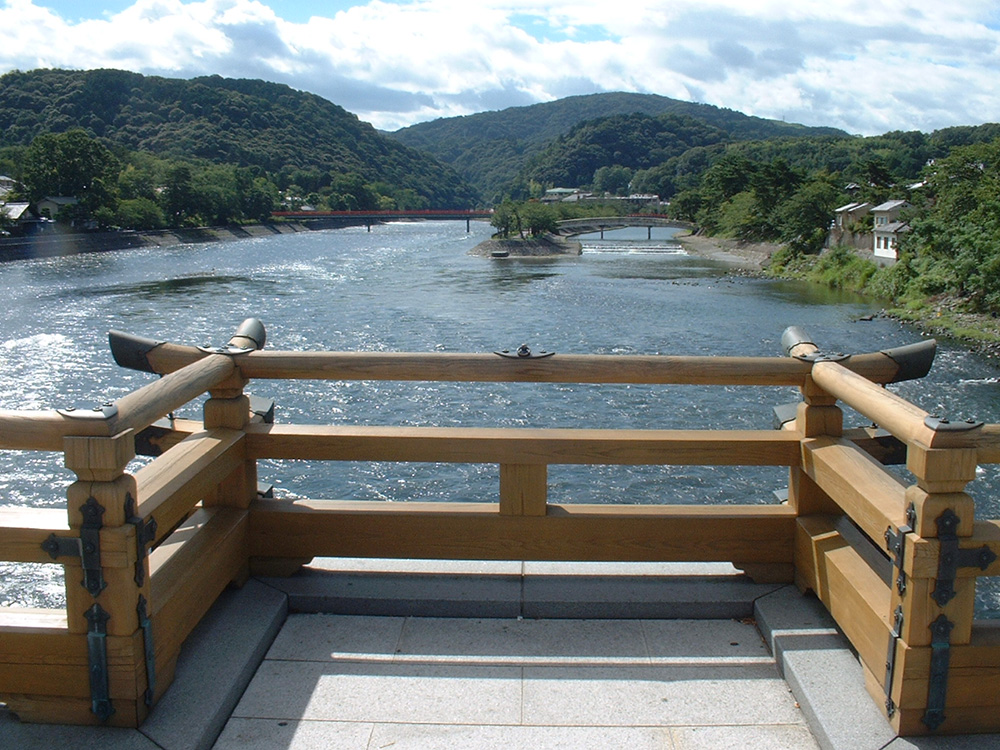 Since that time, Uji has enjoyed many peaceful years and has become a cultural center of Japan, growing in size and beauty each year. Uji city has many historical sights and famous cultural specialties.
Uji Green Tea is the best and most famous Japanese Tea. Please enjoy it in traditional tea houses and ceremonies.
Experiencing the traditional green tea service is the essence of Japanese culture and history.
Enjoy this tradition at Taihoan, the municipal tea ceremony house which offers a beautiful view of the Uji River. Another cultural experience you should not miss is Oubakusan Manpukuji Temple, home to one of Japan's three Zen sects (the Oubakuso Sect), and Mimurotoji Temple which is the tenth pilgrimage point('fuda-sho') of 33 regularly visited temples in the Western part of Japan.
The atmosphere of by-gone eras permeates all these properties. Enjoy them ! 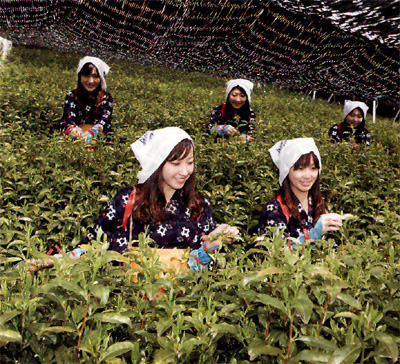 Tea, introduced into Japan by the Chinese priest Eisai at the end of the 12th century, became closely associated with Japanese life, thus forming a unique culture. Uji, in terms of both geography and climate, is very suitable for tea growing and known for producing highly fragrant, good quality tea. By the first half of 14th century, Uji Tea was highly treasured and the methods and technologies used to produce it greatly influenced other tea growing areas. In the tea ceremony, Warring States generals drank powdered green tea habitually. Then it was first planted began to develop as Japan’s representative tea-producing district under the patronage of the shogunate and men of influence. Today, Uji green tea represents both Uji’s culture and industry.

The municipal tea house, Taihoan consists of a main tea-ceremony room, another tea-ceremony room using tables and chairs and a tea ceremony hall, it is a wooden house built tastefully in Japan’s traditional “Sukiya-Zukuri” style. It is open every day from January 10 to December 20, and you are invited to taste Uji green tea in this comfortable and serene location. 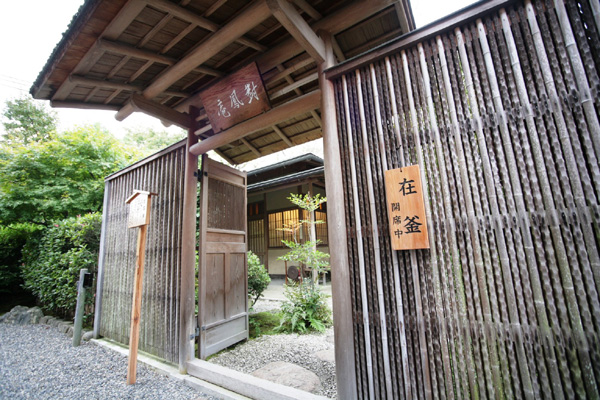 The Tale of Genji and UJi City 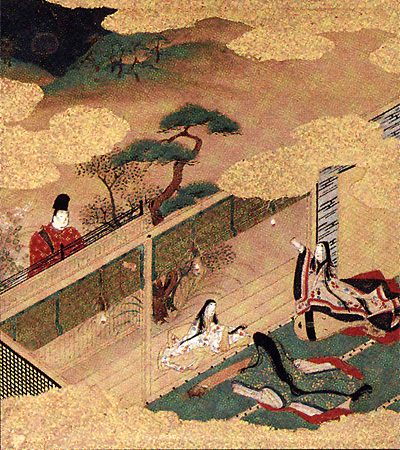 The “Tale of Genji” was written around 1000 years ago in the middle of Japan’s “Heian” period (9th~12th centuries). The author was Murasaki-Shikibu, the daughter of a middle-class nobleman.
While the story consists of 54 individual chapters, the Tale of Genji actually divides into three distinct parts.
The first part tells the story of the principle hero, known as the “Shining Genji”, continuing from his birth to his best years when his power and achievements were at their height. The second part follows his later life, decline and final misery. The third part moves on to the generations succeeding Genji, the intertwining stories and tragic love affairs pursued by his son Prince “Kaoru” and his grandson Prince “Niou”.
The Tale is known as one of Japan’s foremost literary masterpieces, and hailed for its subtle depictions of character psychology and individuality.
The final chapters, from chapter 45, titled “Hashi-hime” until the last chapter “Yumeno-Ukihashi”, are often called the “Ten Chapter of Uji” because the main stage of this magnificent literary work are all set in Uji city. 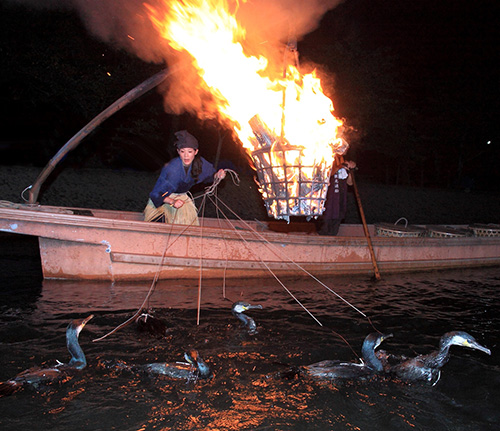 Cormorant Fishing in Uji River has been familiar for a long time, and you can read about it in “Kagero-Nikki” (Japanese classics).
You will be very impressed at wonderful performances by the fishermen their cormorants, and the fire reflecting on the water. 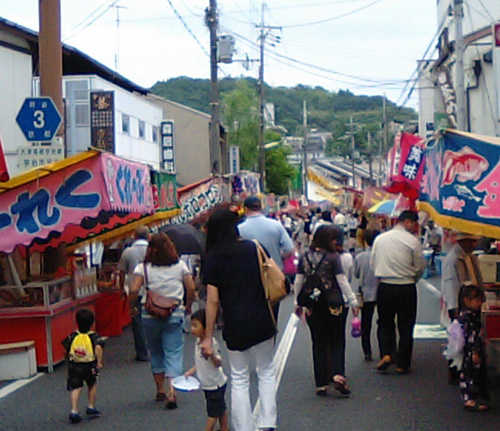 The festival of the Agata Shrine is nicknamed the “Mysterious Festival of the Dark Night”.
In daytime, many people, including children, enjoy the many vendors providing fun along the street. 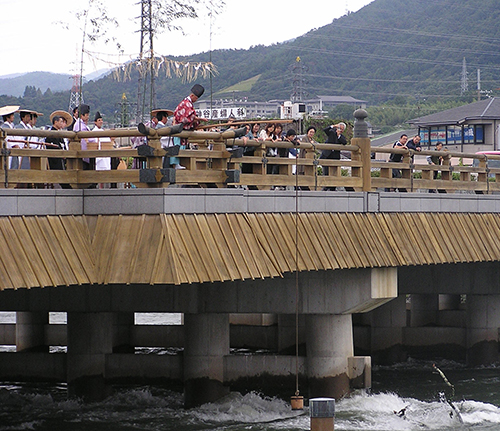